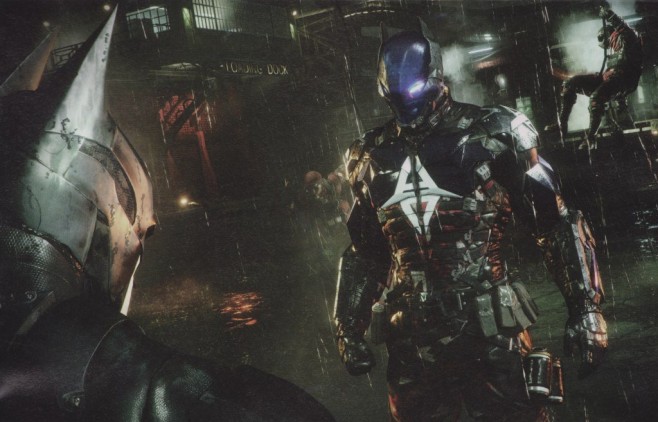 Be the Batman: Arkham Knight Review

Be the Batman: Arkham Knight Review

And then… there is The Dark Knight Rises. Rises is solid. Rises is Return of the Jedi. Rises is The Last Crusade. Rises is the sequel nobody wanted or needed, but that nobody hated. Rises is the little brother your parents weren’t trying to have, but they were happy because he got decent grades and didn’t wreck the family Prius. Rises is a decent end to a great trilogy. Rises is nobody’s favorite. But why? Is The Dark Knight Rises really a mediocre movie or does it struggle under the weight of the quality of it’s predecessors? Would it have been better received had it been the first or second film in the series? Even I feel Rises is the series weakest entry, but I wonder how much my love for Begins and TDK have influenced how I feel about it.

Batman Begins’s video game counterpart, Arkham Asylum, changed licensed video games forever by proving not only that you could make a great Batman game, but that it could stand head and shoulders above all peers in the genre regardless of licensing. Arkham City was the superior sequel to Asylum in almost every way that expanded the rich world of the original, refined the characterization and perfected the combat and predator gameplay of the original. So, where does that leave Batman: Arkham Knight? Does it crumble under the pressure of Asylum and City or does it bring enough new toys in its utility belt to save Gotham and allow you to Be the Batman? 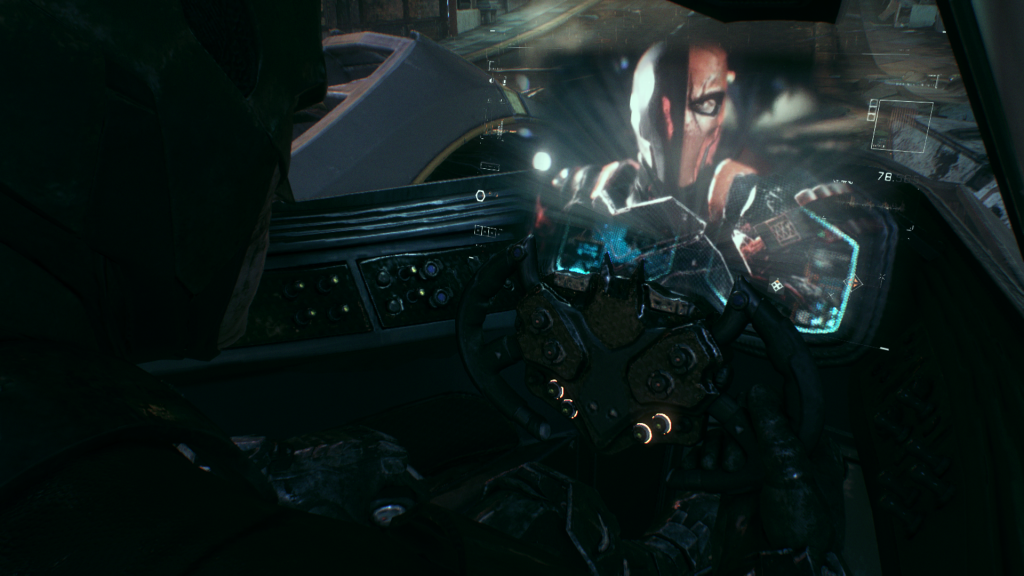 An XBOX ONE Screen Shot of Arkham Knight

Arkham Knight is certainly the prettiest title in the series with much of that being owed to the leap to the Playstation 4 and XBOX ONE. Arkham Knight being on the 8th generation of consoles shows us more of Gotham’s grittiest and grimiest details than ever before. The character models, specifically Batman and the new suit, are the best the series has ever seen down to the different types of fabric – although sometimes things look a little too much like plastic. The Batmobile tears through the city at incredibly high frame rates leaving rebar bursting through concrete pillars and destroyed civilian vehicles in its wake. The occasional freeze up will happen (this may be isolated to XBOX ONE – so be warned) but this is rare.

The gameplay has been polished and perfected with each of the three major gameplay pillars receiving an innovative new addition. Fear Multi Takedowns highlight the predator portions of the game allowing you to take out up to 5 enemies in succession (after full upgrade) when sneaking up allowing even more variety and flexibility with how you approach a group of thugs. If fisticuffs is your thing, there are several new ways to break necks in Free Flow Combat with the most entertaining being the Environmental Takedowns allowing you to kick a thug’s head through a light fixture or an electrical fuse box. Occurring less frequently are the situations where you are joined by Catwoman, Robin, or Nightwing during combat allowing you to do some Dual Takedowns. The Dual Takedowns are fun, but as they are situational they don’t happen frequently enough to really justify their addition. 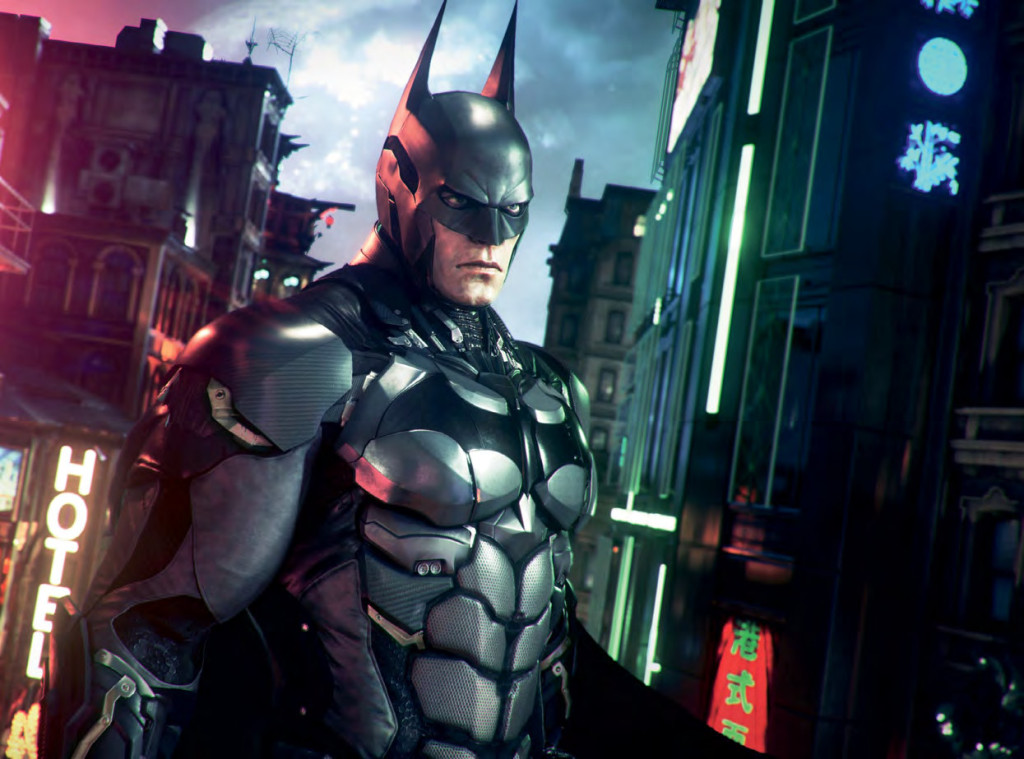 Batman’s New Suit is The Most Advanced Yet

The largest new gameplay feature is, of course, the addition of the Batmobile. Some critics have cited that the Batmobile is fun, but not a game changer. Some critics have insisted that, while entertaining, the Batmobile has too many missions and situations (such as Riddler challenges, trophies, and maps) added to justify the vehicle’s existence in the game without truly innovating or pushing the series further. THESE CRITICS ARE WRONG. The Batmobile is spectacular; it is, without a shadow of a doubt the missing link and the final element to complete the gamer’s experience as Batman. Soaring over Gotham is breathtaking. Beating the piss out of thugs is empowering. Grappling onto a ledge and then snapping a thugs wet leg in half like a chicken bone is exhilarating. But nothing quite compares to diving off of Wayne Tower speeding towards the street and calling the Batmobile to your location, landing inside of it, converting it to tank mode, and then making it rain rubber bullets like Cosby makes it rain rohypnol. Every major version of Batman has had it’s own version of the iconic vehicle and now the Arkham series can finally lay claim to this with, in my eyes, the best looking, best driving, and best criminal incapacitating Batmobile in history. As a Batman fan, I am smitten with this version of the car and it’s just one more amazing way that Rocksteady makes you FEEL like Batman. 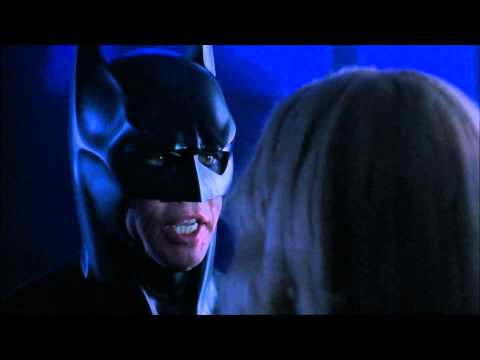 The story takes place approximately 1 year after the events of Arkham City where Batman ended Joker’s reign of terror, ultimately killing him. With Joker (seemingly) gone, The Scarecrow has stepped in as the main villain creating a new plot device called the “Cloud Burst” which will poison all of Gotham’s citizens with fear (COUGH, COUGH, BATMAN BEGINS, COUGH, COUGH) requiring the full evacuation of Gotham leaving only Batman, Oracle, Gordon, a bunch of Batman’s rogues gallery, and a militia headed by a newcomer- the titular Arkham Knight. The Arkham Knight is a militarized, technically outfitted version of Batman who holds a grudge against Bruce for a past perceived wrongdoing and is out for revenge. If this sounds eerily close to The Red Hood/Jason Todd saga then that’s probably because that’s exactly what it is. Rocksteady (who collaborated with DC Comics and Geoff Johns on the creation of this ‘new’ character) cheated a bit with the Arkham Knight being less of a “new character” and more of a reinvention and retelling of an existing character. By the end of the game, Arkham Knight reverts to full on Red Hood mode even taking on the role of an anti-hero and partner of Batman’s.

Other elements of the story are seemingly pulled from all over the Batman mythology with some strange, albeit not jarring changes to characters such as Barbara Gordon being in love with Tim Drake (aka Robin) instead of Dick Grayson, who has reverted back to Nightwing. While inconsistent with the current run of the comics in some respects, it does give the universe in the Arkham series a more confined feel allowing them to play a bit more with the characterization allowing Rocksteady to do their own thing without feeling restricted by an established continuity. Rocksteady takes the most advantage of this when the game ends with Bruce Wayne being revealed to be Batman, giving up the cowl after he defeats Scarecrow, and walking into Wayne Manor shortly before it self destructs with Wayne and Alfred allegedly inside putting an end to Bruce’s time as Batman (COUGH, COUGH, DARK KNIGHT RISES, COUGH, COUGH) and the alleged end to the series. Time will tell if the success of the series will bring Rocksteady around to a fourth game or if they’ll just have Netherrealm create another mediocre $60 DLC pack and call it Arkham Origins 2.

Completing the main game and earning the “complete” ending requires finishing all of the side missions, including solving and collecting all the Riddler puzzles and trophies within the game. While you can finish the game and story without solving the side missions- you just won’t see the alleged “best” ending. There are several AR missions with varying degrees of difficulty but nothing quite as challenging and replayable as the Riddler’s Revenge missions from Arkham City meaning that there is significantly less post game content in Arkham Knight. There are several DLC add-on stories that have been released, some specific to certain retailers with pre-order, others to Season Pass holders, but so far these are probably best left to hardcore fans only as they are 1-2 hours worth of real gameplay total with little to no re-playability. Hopefully Rocksteady releases something a bit more substantial with later DLC. The Story+ allows you to go through the game a second time with all of the previous upgrades, add-ons and gadgets available from the start. While Knight has a lot to offer, it’s simply not as deep as City.