That’s Deep: The Characters of Rick and Morty

A character study of Adult Swim’s most depressingly hilarious show.

I know I promised a Kingdom Hearts 3 hype piece (and that may very well still happen), but I figured I’d take a break from my gaming obsession to touch on another very real addiction of mine — Rick and Morty.

There’s something about this cynical and horrifyingly dark show that makes me want to become a serial drinker. It is, without a doubt, one of the most eye-opening shows on late-night television. Rick and Morty is the pinnacle of depression jammed into a package of humor and neatly wrapped in the pretty ribbon that is sci-fi adventure. And yet I love it. I love that it represents the scarred underbelly of tumultuous relationships while poking fun at familial ties. Because sometimes, your family is royally insane. It is what it is.

The Rick and Morty fam-bam

The last two minutes of this episode is arguably one of the most disturbing moments on TV. I first watched this while reclining in bed late one night with my boyfriend. During these final moments, Rick goes into a deeply depressed state and attempts suicide after Unity, his love interest, leaves him (she also happens to be hive mind that takes control of host bodies for the sake of “good”). 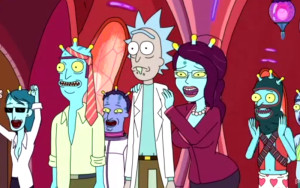 I’ll digress for one moment here to address a rather intriguing aspect of Rick’s personality — the warring need to be both alone and surrounded. It’s evident throughout the series that Rick views other humans as inferior, and he distances himself from others at all costs. And yet, the morbid love affair with Unity breaks all pre-defined notions of Rick’s solitary path in life. Unity’s hive mind is the ultimate community — one which Rick willing dives into. This then begs the question, which is more important? Individuality or community? Let’s not forget that the nature of this community is one derived of a forcible takeover, but again, I’m straying from my character analysis at this point.

Returning to Rick’s despair — I must give kudos to the creators, Justin Roiland and Dan Harmon. Every detail down to the song choice, Do You Feel It by Chaos Chaos, nails the suffocating emotion of depression. Plus, they cut straight to the credits — no happy ending here, folks. Even if you hang around afterward, you’ll see an intoxicated Rick in his spaceship begging Unity to speak with him.

And that’s just his bleak side. With Rick, you can pretty much expect him to run the gamut on superiority, alcoholism and pessimism (or realism, I guess it just depends on your own life views). Nihilism is another option, too. Great role model, right? It’s no wonder Morty tags along with him (but honestly, Jerry isn’t even a viable option). Rick is also a pansexual, which I think is absolutely necessary for both his character and this series — if, in fact, there are multiple universes/worlds/realms/etc., we cannot expect relationship ties to be subjected to modern-day, Western heterosexuality (seriously, go watch Auto Erotic Assimilation, if nothing else).

There’s a lot I could say about Rick, but arguably the only way to get a true understanding of his sociopathic tendencies and amoral disposition is to watch the damn show. Just do it. You won’t regret it.

Ah, Morty. Perhaps the picture of childhood innocence, or perhaps the product of parental neglect. Morty is unintelligent, skiddish (though he does gain a few points in the brave category as the series continues) and distressed, likely due to his traumatic experiences while venturing into new worlds with Rick. Think season one, episode two: Lawnmower Dog. Here, he sees his sister in nothing more than underwear in a sexual torture chamber (and honestly, that might be one of his mildest traumatic experiences). 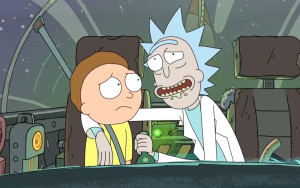 Perhaps the saddest thing about Morty is his parents’ obvious lack of faith in his intelligence. They have absolutely no qualms with denouncing his intellect (even in front of him), opting for phrases like, “he’s got some kind of disability or something.” Or my personal favorite, courtesy of none other than Jerry himself:

“We both know you’re not as fast as the other kids, and if you want to compete in this world, you got to work twice as hard.”

Jerry lays that on Morty during the pilot episode! Pretty much sets up the tone for the rest of the series. And, to put it bluntly, the not-so-bright Morty is a genius literary device. He’s what I like to call a “pants character” (coined, but not trademarked). He’s easy for the audience to relate to; anyone can don this pair of comfortable sweatpants and blindly follow the exploits of Rick without bringing any additional baggage into the picture. Most of the time I dislike pants characters, but in this case, I think Roiland and Harmon knocked it out of the park.

I despise Jerry (and that’s a good thing). It’s no wonder Morty turns to his grandpa for guidance — Jerry is a bigger pushover than Milton Waddams. Jerry is perpetually searching for his stapler (i.e. approval from his wife) without ever actually setting the building on fire. His ineptitude as a husband stems from his unparalleled level of insecurity, and Beth capitalizes on his meekness by running the household. Jerry is, in every sense of the word, the laughing stock of this show. He’s incompetent, jealous, incapable of growth, and in every way the perfect foil to Beth. 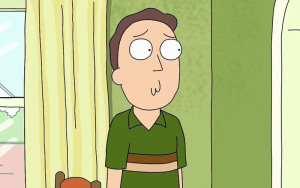 We quickly learn throughout the series that Jerry is helpless when it comes to surviving anywhere else but Earth (and arguably anywhere else but the tiny scope of a life he’s carved out with Beth). Maybe it’s just the female in me, but I can totally see why Beth is so condescending toward him (but more on that later).

If anything, at least Jerry cares about his family (albeit in a weird way that often gets derailed due to his insecurities). And perhaps in a different life where Rick isn’t a part of the Smith family, Jerry might be OK. But if Rick is the catalyst for Jerry’s inferiority complex, then god only knows what makes Beth’s wheels turn. Which leads us to …

At first glance, it’s easy to ping Rick as the troubled character of the show; yet, upon closer inspection, I’d have to cast my vote for Beth. Rick has issues, don’t get me wrong. But Beth is both insecure and controlling, intelligent and doubtful, family-oriented and cold. She’s somehow the polar opposite of every emotion at the exact same time. 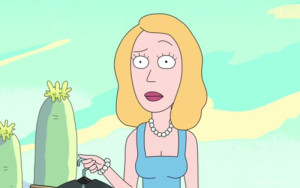 Beth is selectively compassionate, with her affections primarily directed toward Rick or Morty. She has virtually no love for her husband, often scoffs at his remarks, belittles what small ideas he manages to cook up, and seeks reprieve from his existence by taking “trips” or “breaks.”  She’s bitter and resigned to her life with Jerry (her accidental pregnancy with Summer sealed the deal), and frequently wonders what her life could have been like had the pregnancy never happened (makes you wonder if Morty was a “fixer” baby or not).

But here’s where Beth starts to get tricky: after all that glaringly obvious dislike for her husband, Beth actually fears abandonment — part of the reason she’s resigned to staying with Jerry. When Rick left his family years ago for some unknown reason, Beth came to resent her mother and grappled with abandonment issues. It makes you wonder if Jerry were to leave how she’d react (though it’s clear that won’t happen — he’d blow his brains out before walking out on her).

Now, with her father back in her life, she clings to his every move and idolizes his existence. She controls the household (primarily Jerry), yet allows her father to walk all over her for fear of him leaving again. She’s so desperate for his approval that she’s abnormally harsh on herself, constantly wondering if she could have been a “real” surgeon (which, unfortunately, is perpetuated by Jerry’s constant nagging, as he always reminds her she’s merely a “horse” surgeon).

Summer reminds me of those girls in high school everyone hated, but simultaneously tried to be. There’s really not a lot to say about her in comparison to the other characters — she’s smarter than Morty and reticent of Beth, yet she’s obsessed with popularity and technology. She’s primarily concerned with increasing her status amongst her peers, and only really begins to flesh out for me in season two. I don’t have a problem with this — she’s a necessary trope that adds to the dynamic of the Smith family. 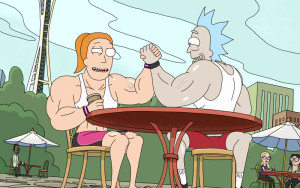 During season two, she gets a bigger role in the show and we get to experience more of her personality. We see her journey on adventures with Rick and Morty and start to assert herself as a viable character in the series.

In the long haul, I wonder how Summer’s new role will affect Morty. He could easily spiral into his own pit of depression, what with Summer replacing him as competent sidekick to Rick and his parents’ total lack of faith in his abilities. For all we know, Summer could be Morty’s catalyst into deep-seated despair. Either that, or she’ll be the one rooted in a dark cave with the realization that her entire existence is due to her parents “settling” after Beth’s accidental pregnancy. Bleak, broh. Bleak.

It’s probably safe to say that if you were to meet any of these characters in real life, you’d have a very different reaction. The point is, each one of these characters represents some fault in humanity, and the creators exploit that while adding a comical flair to make it digestible.

We didn’t even touch on the exploration of scientific concepts in this article (it probably deserves a piece of its own), but it’s definitely worth a mention. Roiland and Harmon toy with theories (think of the hilarious nod to Schrödinger’s cats from the episode, A Rickle in Time) while creating parodies of well-known sci-fi movies and shows.

Basically, what I’m trying to say is, this show is fantastic. It’s like your favorite flavor of ice cream, cradled by a waffle cone of crazy, and topped with sprinkles of wisdom occasionally tossed at you by Rick.

As a writer, I’d like nothing more than to hang out with Roiland, Harmon and the show’s writers for a day. If I had to give Rick and Morty a rating, it would be a 10 out of 10 (right up there with South Park guys, keep up the good work). If you’re in need of a dark humor with a rated R feel, then give it a go. You won’t be sorry (or if you are, then sorry not sorry, broh).

3 thoughts on “That’s Deep: The Characters of Rick and Morty”