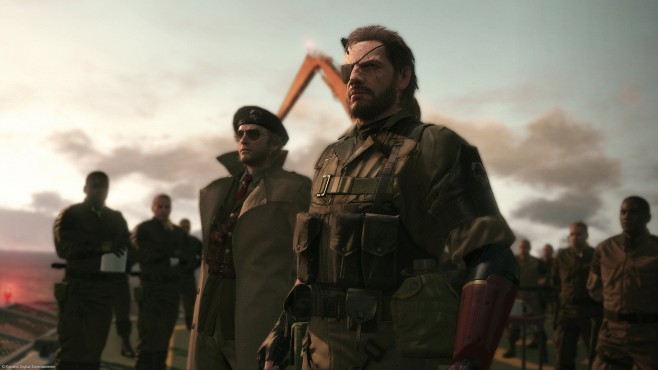 So here it is folks, my LONG overdue review of Metal Gear Solid V: The Phantom Pain.  In this article I will focusing on the single player campaign only, as I feel that is what the Metal Gear Solid series has always been about from the beginning.  I’ll be covering 4 main topics: gameplay, stealth, visuals, and progression.  I don’t plan to discuss the story line because its more fucked than Gundam, and I wont be discussing the multiplayer aspects because this isn’t Call of Dooty.

The gameplay for Metal Gear Solid V is very much like that of its predecessor MGS4: Guns of the Patriots, in the fact that you have a lot of different options how to approach situations with enemies.  You can run in, guns blazing and try to take everybody out, or sneak in and try to get through each section completely unnoticed.  In Metal Gear Solid V you need to acquire certain talents from the field by capturing, and returning to your Mother Base, soldiers with various levels of skills.  You do this by returning them via a fulton lift system which if you don’t know what it is, think of the scene in The Dark Knight where he captures the chinese accountant and flies away on a balloon that gets picked up by an airplane.  A little outlandish to do several hundred times during the game but its Metal Gear, so outlandish is to be expected.  I myself prefer to analyze every area I’m in, marking each soldier then wait a few minutes to try to watch their patrol patterns then pick them off one at a time and return only the most skilled soldiers in the group. Each time you go out on a mission you are required to select your gear, mission buddy, and vehicles if you’ve obtained any.  Each mission requires a slight amount of thinking as to which guns, buddy, and other equipment are going to be best suited.  You can develop many different weapons and equipment at your Mother Base depending on the level of skill the recruits you have, from pistols to nukes.

Stealth has always been the prime focus of the Metal Gear series and The Phantom Pain is no different.  Much like Metal Gear Solid 3: Snake Eater, you choose between various camo patterns based on your missions to help improve your stealth.  To be honest I am not sure about how much of an effect this has because I have always worn the same camo you start with and have not seen any advantages/disadvantages to it.  I once set off an alarm in a facility and alerted an entire base to my presence, after running down a nearby road for a short period I laid down next to a hill by the side of the road with the grass barely being taller than I was.  My camo was absolutely NOT anything close to the color of the hill or dirt yet 4 guards came running down the road, 2 of them stopped before me and 2 of them walked right past me looking directly in my direction without spotting me at all.  It was then that I realized the AI in this game is fucking broken.  They were all promptly tranquilizer darted and fultoned the fuck out of there as punishment for being stupid assholes.  Oh and I forgot to mention all 4 of them were hit with darts from the same direction, none of them even looked back at me to try to spot me again.  On a positive note about the stealth, you cant just run around all willy-nilly to get around because soldiers from over 30 meters will spot you and shit gets real very fast when it comes to them calling in reinforcements.  You definitely have to stay on your toes in this game since there’s no active map to look at to see exactly where every enemy is around you, you can mark them once you spot them with a scope to keep track of their movements from then on, but if you don’t find them often times they find you.  This is where the dog buddy, DD, comes in handy.  He will make quiet barks to point out enemies you may not have spotted with your scope so I tend to bring him along on most missions.

Visually, Metal Gear Solid V is a fucking masterpiece in most areas.  Cut scenes are clean, vivid,  beautiful and match the quality of the gameplay graphics as well.  That’s one thing I’ve always loved about Metal Gear, the trailers and cut-scenes almost nearly match that of the actual in-game visuals.  No bullshit gorgeous trailer with actual shit graphics (looking at you Blizzard and your WoW bullshit).  One thing I must say that I noticed that made me frown a bit, is the time shadow progression.  What I mean by that is that The Phantom Pain has a day to night lighting progression and when looking at shadows of buildings you can almost see the shadows “tick” as if they were a second hand on a clock ticking away as the day goes by and not smoothly like you would expect from a visually glorious game like this.  The landscapes, environments, and characters are all detailed in a stunning fashion and the new Fox engine makes the game run smoothly with no compromise in beauty when the graphics processing intensifies.  You can create an emblem as a creative way to personalize the game, this emblem shows up on various parts of your Mother Base and down to even things as small as patches that Snake wears.  I was surprised to see this emblem showing up in all sorts of different places around the base, all the way up to the flag that flies atop the bases command center and freight containers around the storage lots.  Flying into each mission in the open world environment of Phantom Pain, its amazing to look out and see the landscape go as far as the eye can see. 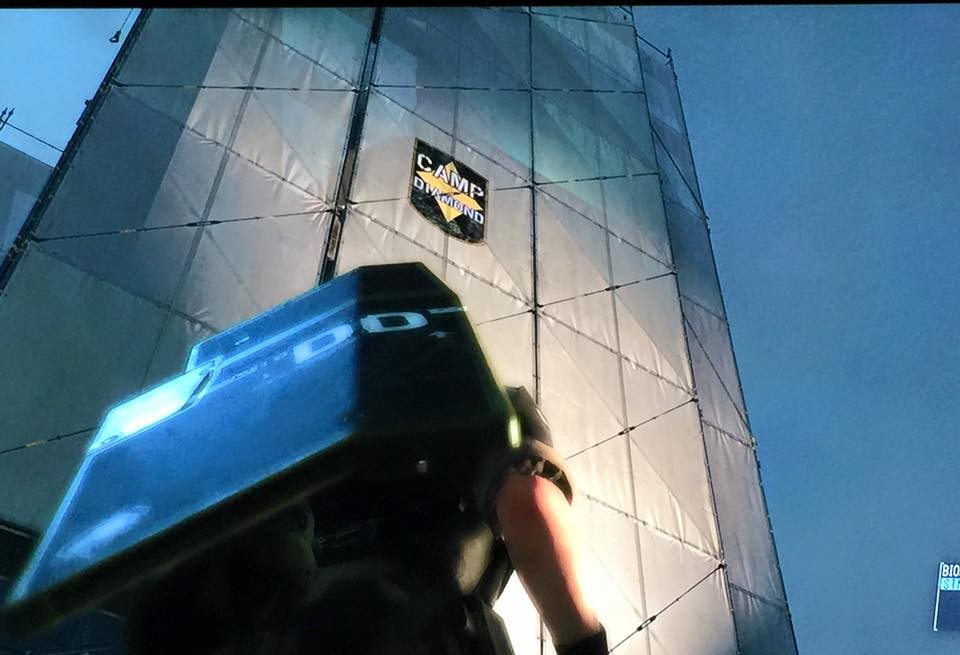 Snakes group is called the Diamond Dogs, so I chose to call my Mother Base “Camp Diamond”

The game progression system of Metal Gear Solid V reminds me very much of Grand Theft Auto V in the fact that you can play multiple missions before doing just the right thing to trigger a cut scene to move the story along.  You can free roam around or move along with each mission in order or stop and play a number of smaller side missions to get more of the story.  Building up your Mother Base, creating new weapons, and the flow of the storyline seem to have good pacing and you dont really have to grind a lot to keep up with the games difficulty.  The more highly skilled soldiers you fulton back to your base, the faster you develop weapons, items, and tech gear.

I truly feel that with Metal Gear Solid V being the last console game Konami stated they are going to make, they ended on a very high note.  As I explained in my Konami Conundrum story, I was pretty pissed about Konami taking Kojima’s name off of the game cover but he was very clever in the fact that each mission is like its only little movie, ending with a short roll of credits for the developers.  So while his name didnt appear once on the front cover, it appears several dozen times during the game, as if he was giving a big, quiet “fuck all of ya’ll” to Konami. 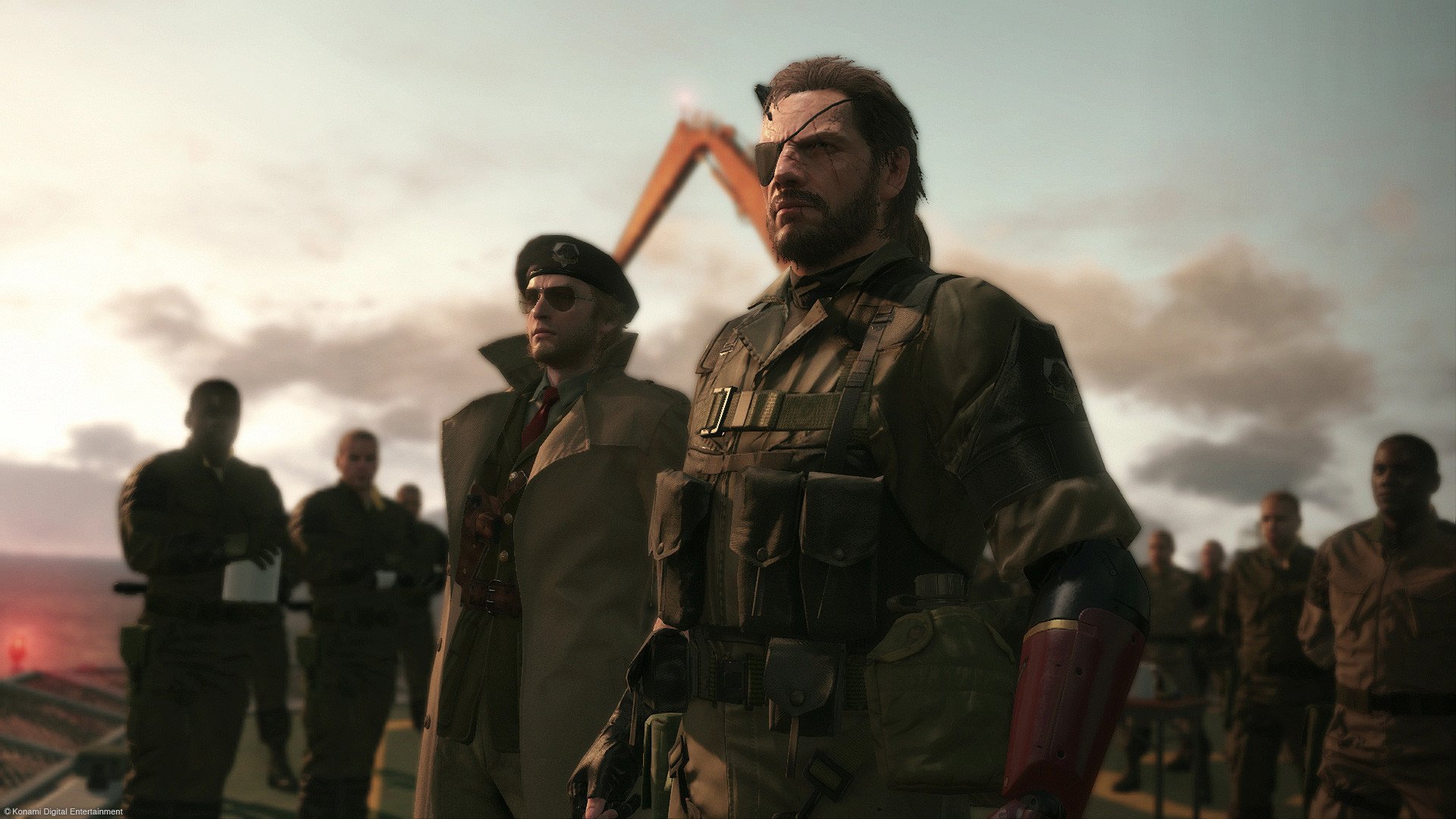 Punished Snake looking on with Miller as Konami rakes in piles of dirty, stinky, cash.