Here we are folks it’s October 21st, 2015 and that means it’s Back to the Future day at Universal Studios Hollywood!  I am in hopes that the park does something big for this event!

8:15: the day is not off to an optimal start. Fucking crepe cafe at city walk was not open!! This is a staple of every Universal Studios trip I have ever taken. Their site states they open at 8 am but they girl inside of the dark and empty restaurant stated they opened at 9:30…fuck…so the game plan is to get Jamba Juice so we can go get in line first.

8:35: walking around city walk checking out all the stores which are also not open. Things from another world, a nerds heaven, filled with all sorts of movie, video game, and comic book merch has taken over the location that was previously a Gamestop located next to the Hard Rock Cafe. A much bigger storefront than they previously occupied which is good because they have a lot of shit to sell and their other storefront was way to small.  about to head to the gates to get in line. Park doesn’t open til 10 but dammit I want in first! 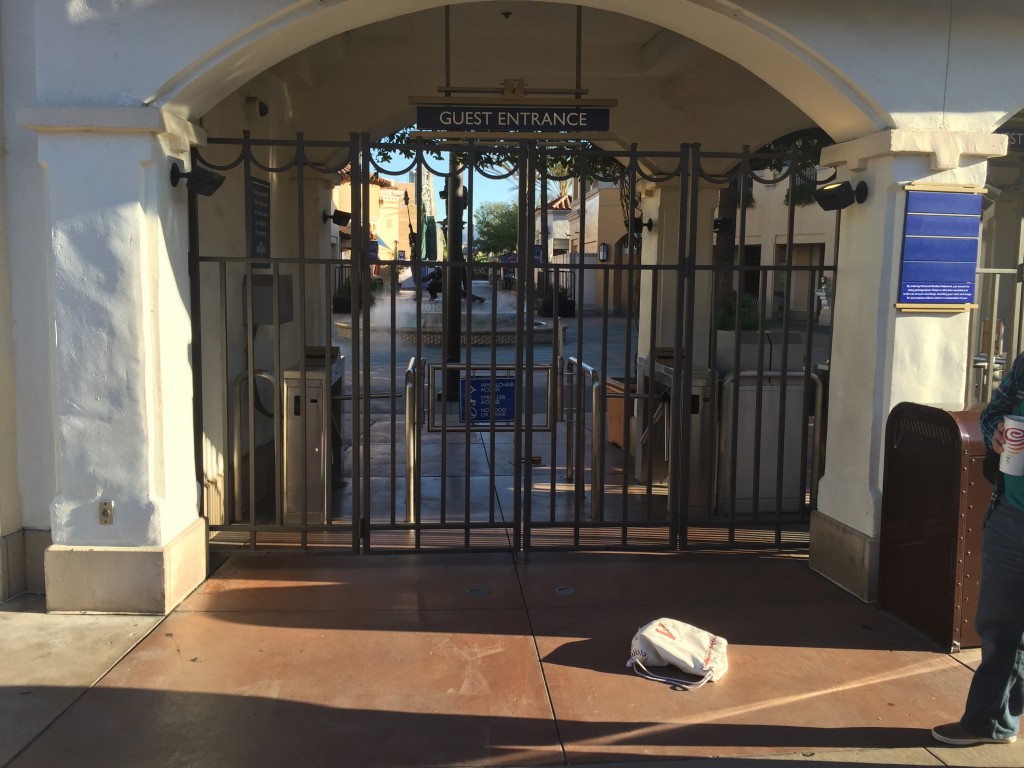 9:01 seeing a lot of back to the future themed tshirts but my hockey jersey still rules them all 🙂

9:47: Finally in the park just waiting for the full green light to get in further

10:52 just finished the best rides of the park in park! the mummy returns coaster: a launch coaster that rides you down a nearly pitch black track with random black light images of evil mummies from the movie which stops at a dead end then runs you backwards to the main platform, the Jurassic park water ride: a calmly serene raft ride that takes a turn for the worst and ends with nearly avoiding a lunging t-Rex before a plummet down the falls, and the home run hit of the entire park the transformers 3D ride: a 3D experience that takes you a long a track to various screens that shows a battle between the autobots and decepticons for the allspark while riding in an autobot named EVAC, this is definitely one of the most immersive rides of the entire park, love all of them for different reasons. So far no big park events celebrating 10-21-2015 🙁

11:00 so many shiny hats everywhere, I’ve seen tshirts based off of Pepsi perfect, cafe 80’s, save the clock tower, hover board, mr fusion, and about 88 other types of shirts (see what I did there?) still no jerseys! THERE CAN ONLY BE ONE!!!

11:22 went back to city walk for an overdue food break, GOT MUH DAMN CREPES yes those are both mine DONT JUDGE ME, they have over 20 styles of sweet and savory crepes and I got the ham, egg, and cheese crepes and strawberry crepes with powdered sugar and whipped cream…NOM 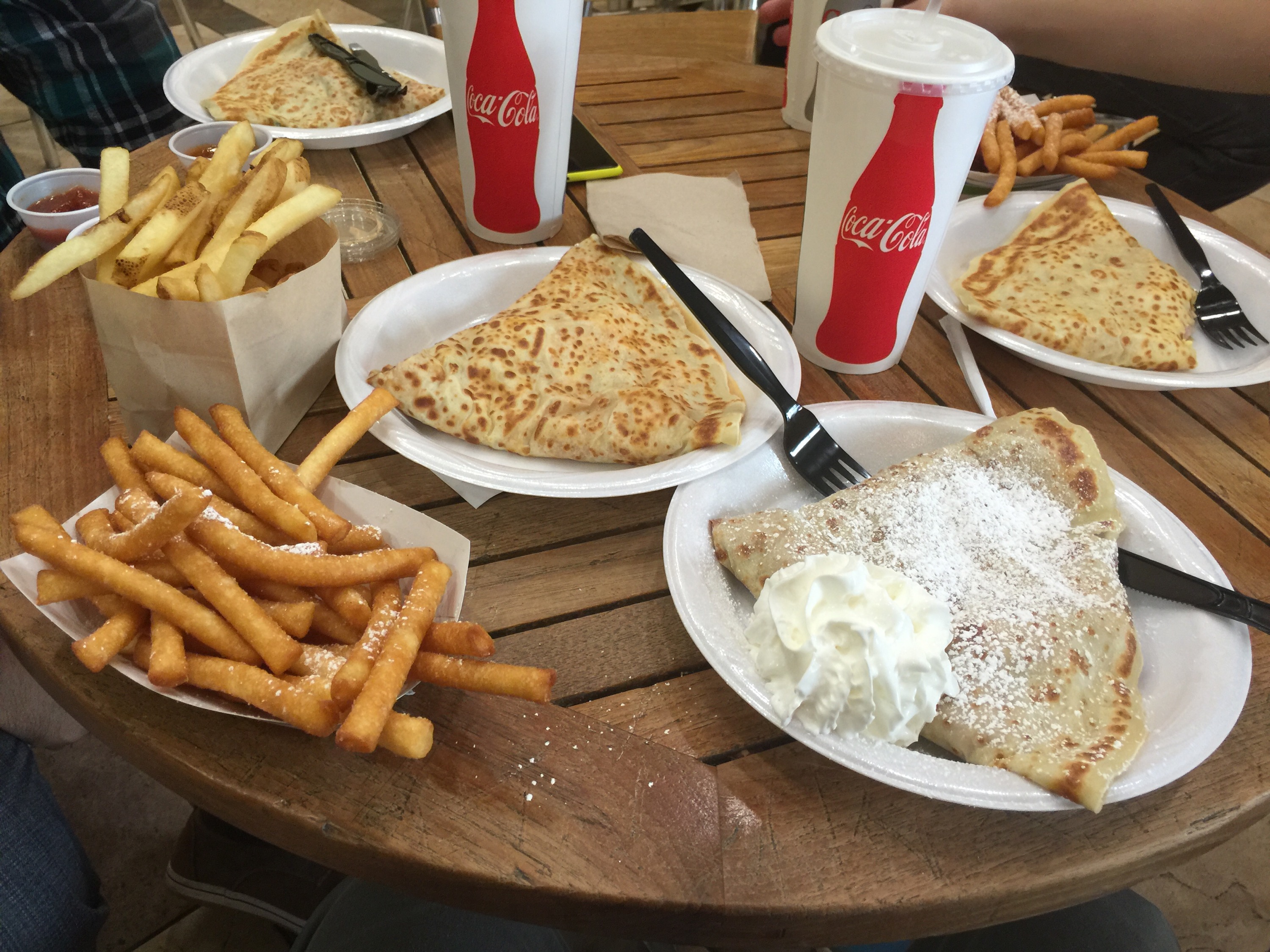 11:56 crepes have been REKT, now we are at the things from another world store at city walk

12:42 just walked by the AMC theatre at city walk and holy fucking balls they’re showing back to the future at 4:29pm…mind = blown.. 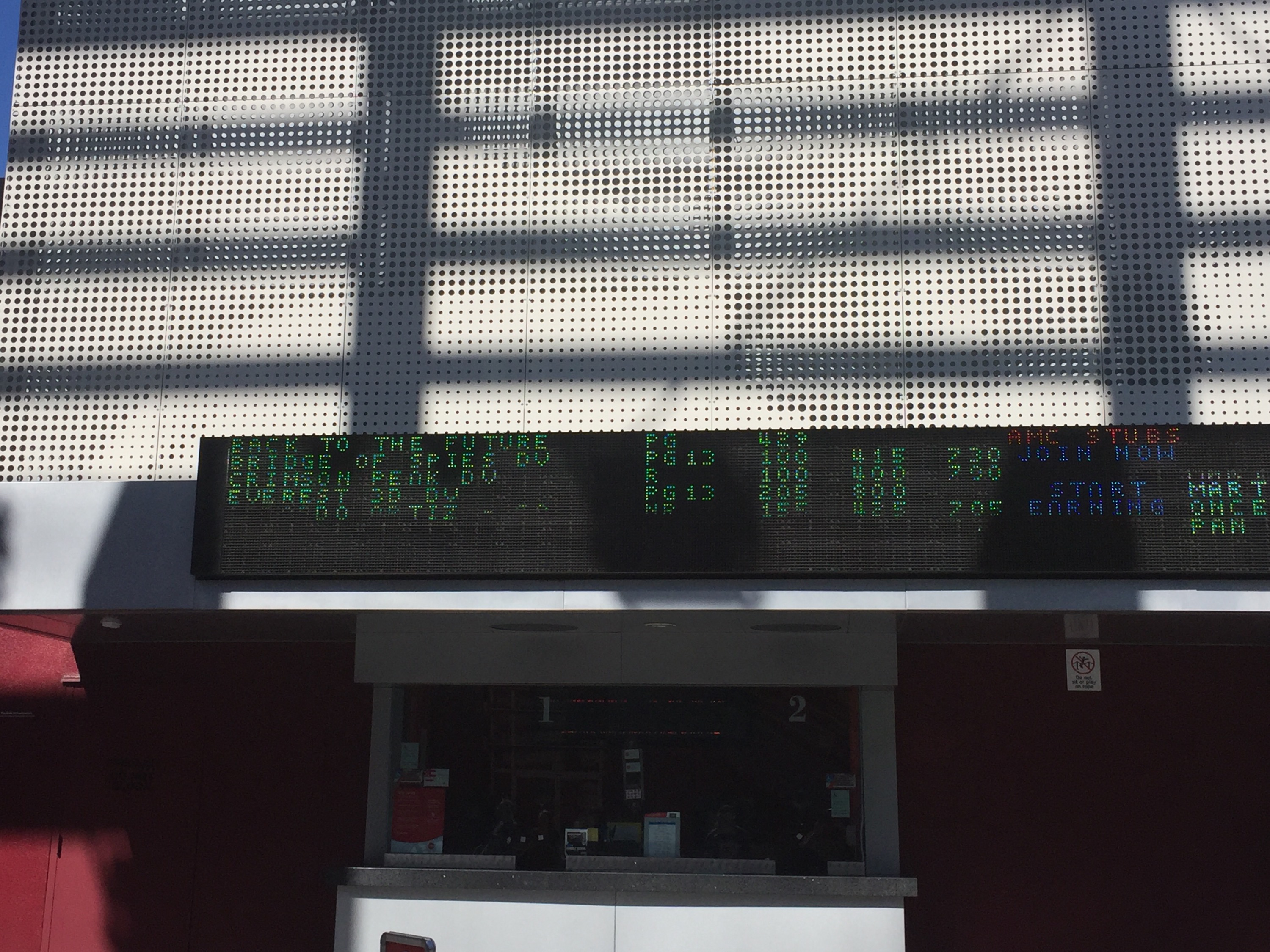 12:53 hogsmeade is still in progress, should be open spring of next year,  going to have various Harry Potter themed shops and restaurants and a very immersive looking Harry Potter ride, should be interesting 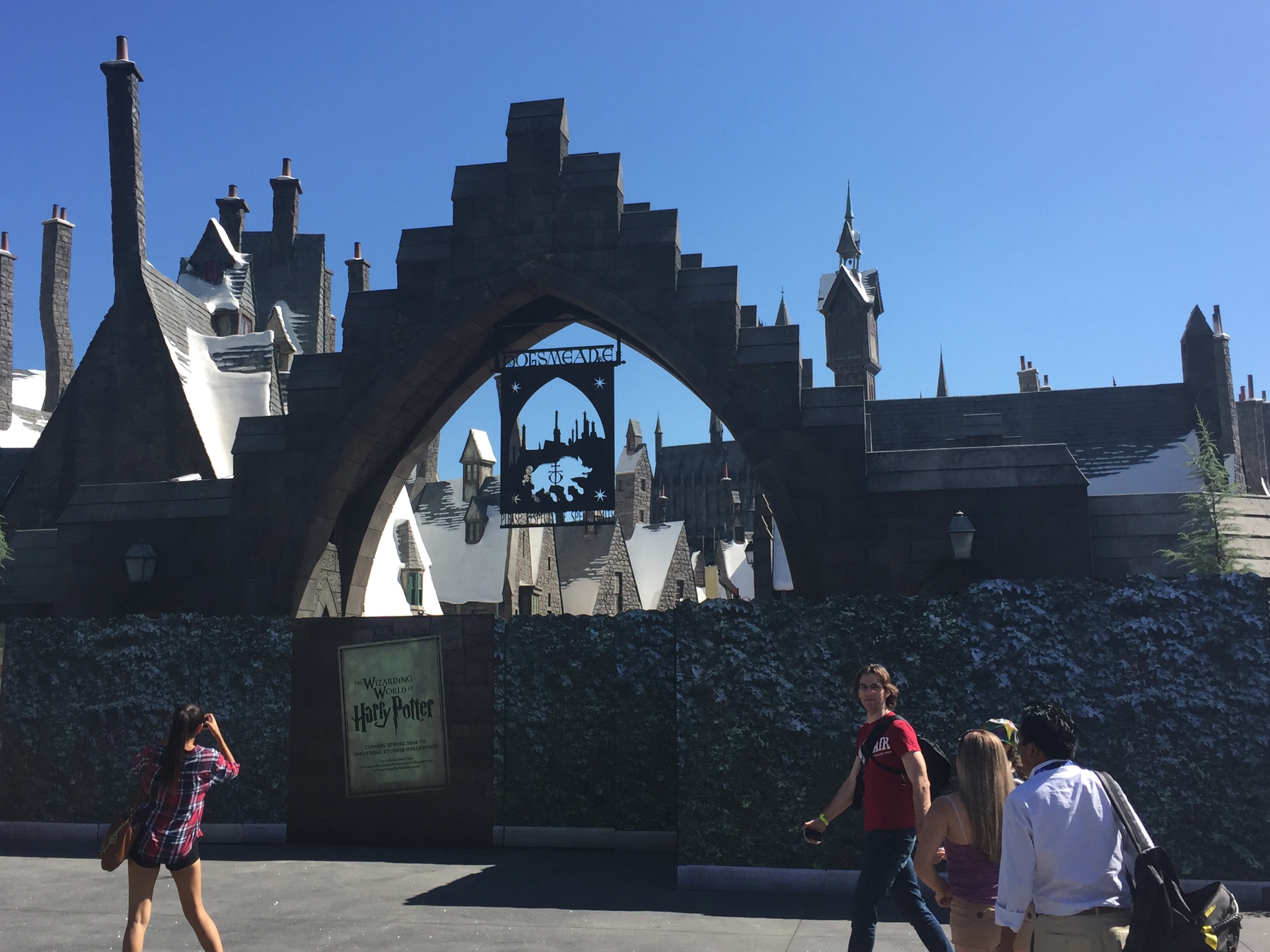 1:21 standing in the first line we’ve had to be in for longer than 10 mins at the backlot tour…hot as shit but the tram tour is a must do if visiting universal studios. You get to ride around various sets including the area were the famous clock tower once stood before it was damage in a large backlot fire years ago

1:39 finally on the tram tour, line wasn’t terrible but it’s one of the longest, or longest feeling at least, probably in line about 30 mins, need water…dying…

1:46 looks like we won’t even be going around the cityscapes of the backlot because of active filming…dammit…

1:52 passing by the picture cars section of the backlot tour, the delorean is not here anymore as it has become a part of one of the little museums inside the park 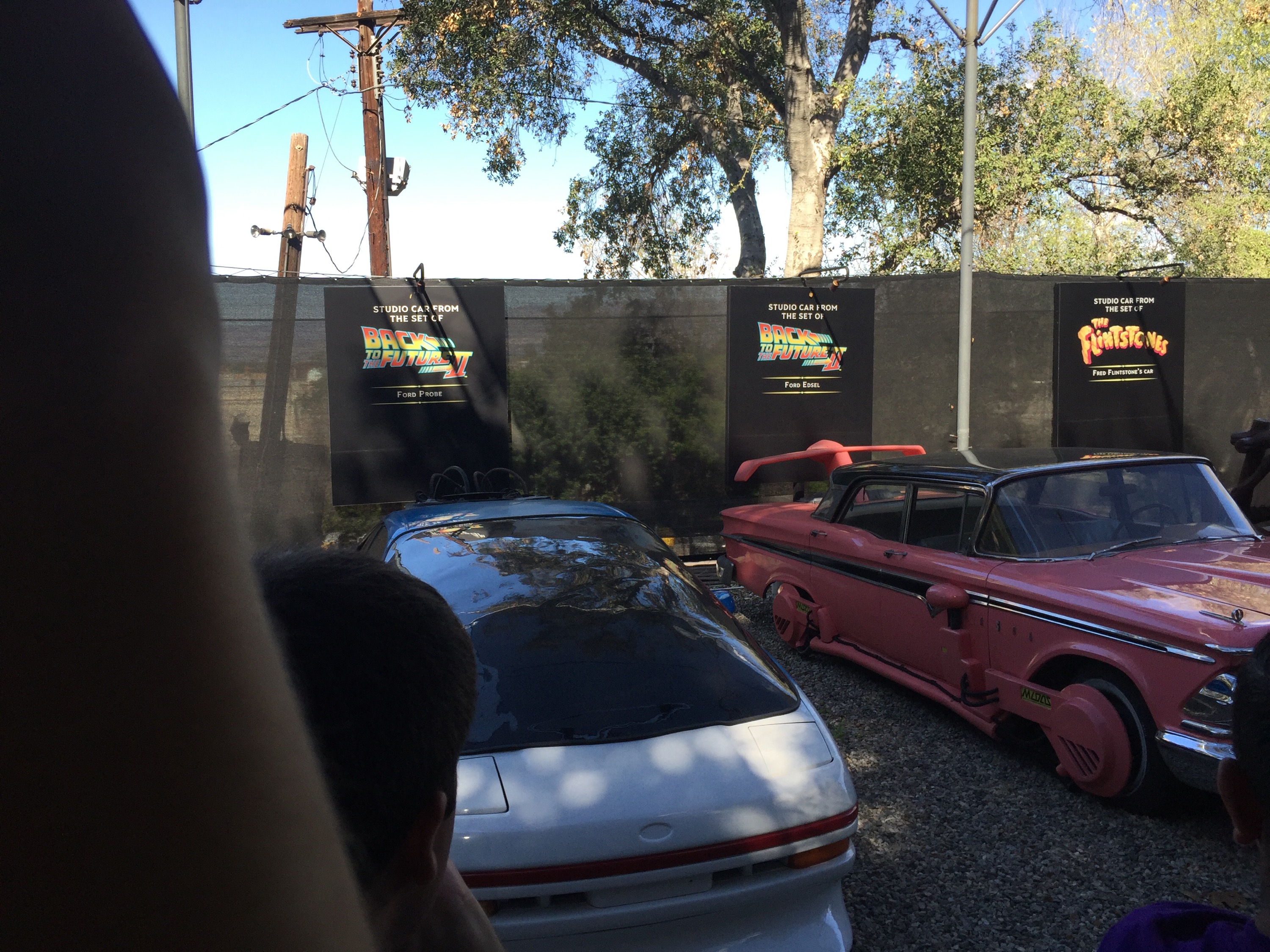 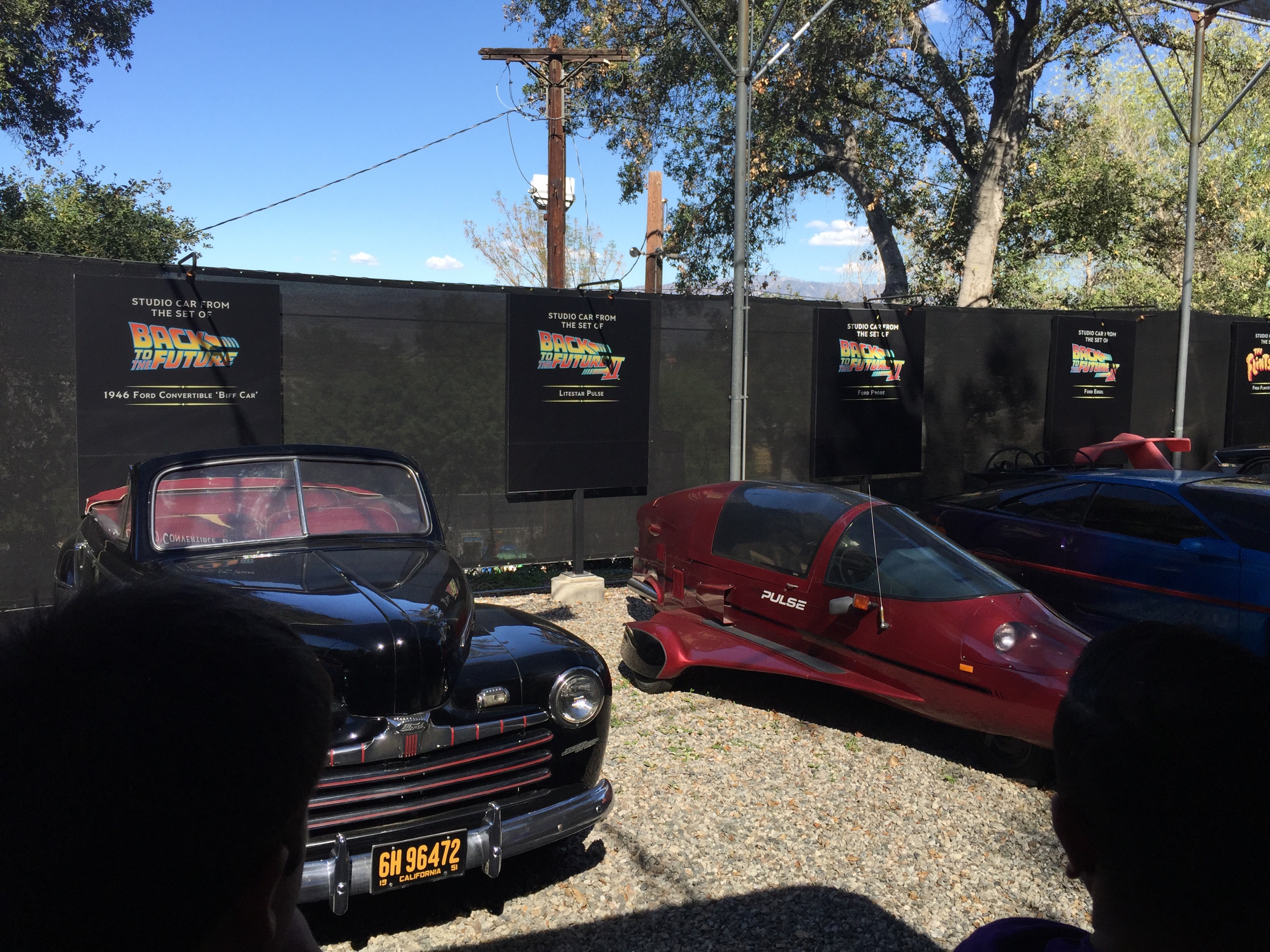 2:29 ok the fast and furious experience wasn’t as terrible as I would’ve though, the immersion was good and it didn’t seem as cheesy as the YouTube video I watched of it

2:35 here a shot of Springfield in all its glory, moes tavern actually serves alcohol too 🙂 the tongue entrance to the ride is made of a squishy material to mimic a tongue…

2:48 line was surprisingly short for the Simpsons ride, the area where you stand in rows to get sorted into various cars smells like popcorn for immersion, it’s working, getting hungry again…

4:22 just rode the lower lot trifecta again (Jurassic park, mummy ride, and transformers and while going up to the upper lot I saw a legit Marty and Jennifer couple from part 2 in their correct outfits, didn’t want to take pix and be the weird guy just use your imagination for this one

4:25 hogwarts as seen from near the entrance of the Simpsons ride….soon… 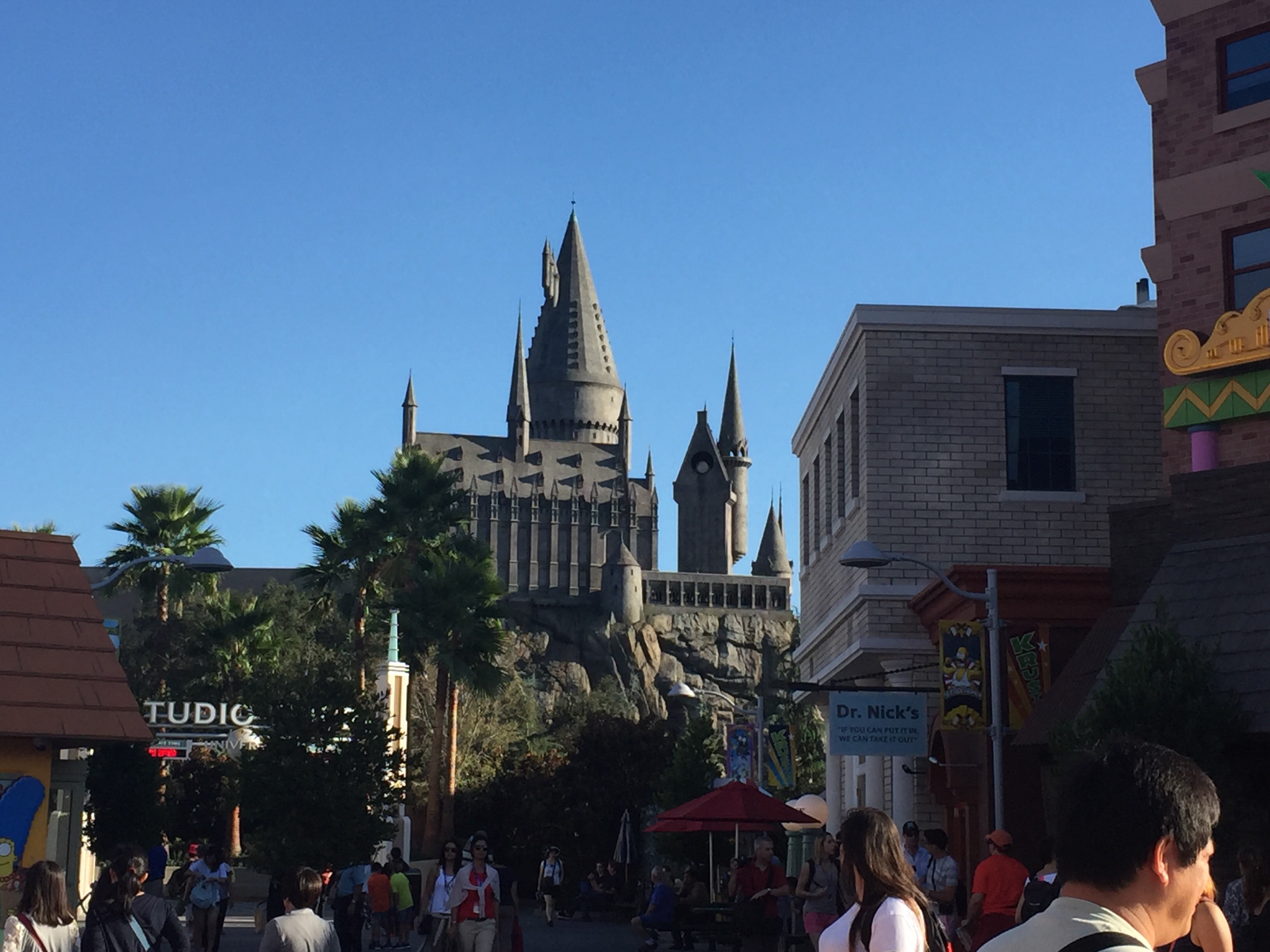 4:29 IT THE EXACT TIME…aaaand…nothing special is happening, fuck you universal…there was so much potential for you to knock this out of the park for fans of the BTTF franchise but it seems that all the commotion for Halloween horror nights (which isn’t even happening tonight only thurs-sun) took up their time and budget

5:51 park is closing, nothing happened to honor the day of days for many nerds, I’m disappointed but still had an amazing time and definitely recommend a trip to the park if you’ve never been here 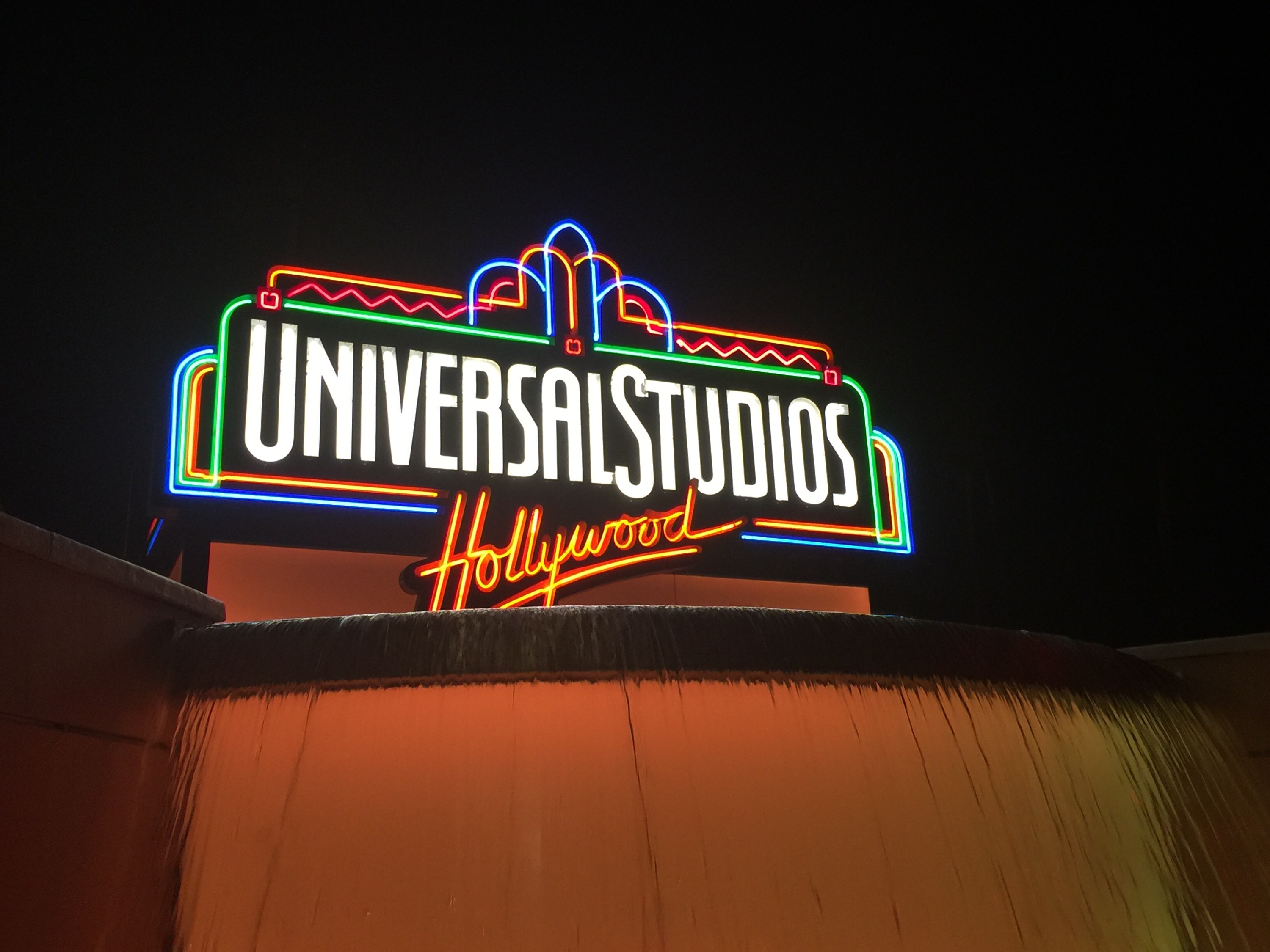