Maybe.  Possibly.  Not quite.  We’re not really sure.

Entertainment Weekly has reported that His Freshness, Will Smith himself, is working with his production company, Overbrook Entertainment, to bring a new out-of-his-element show to the airwaves.  So even though we haven’t seen the inside of that egg shell colored mansion in almost 20 years, and probably won’t again, it looks like we might have some surface similarities in Smith’s new show.

I like that Smith hasn’t forgotten where he started, unlike a lot of Hollywood celebrities these days.  His big break was on Fresh Prince, and he still harkens back to the role frequently on talk shows and public appearances.  I just really, REALLY hope he doesn’t try and cast Jayden in the lead role.  We don’t like him, Will, so stop trying to make “fetch” happen. 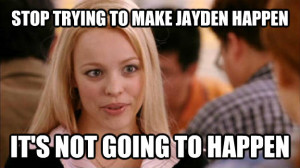 What do you think of Hitch trying to recapture lightning in a bottle? Let us know in the comments below!